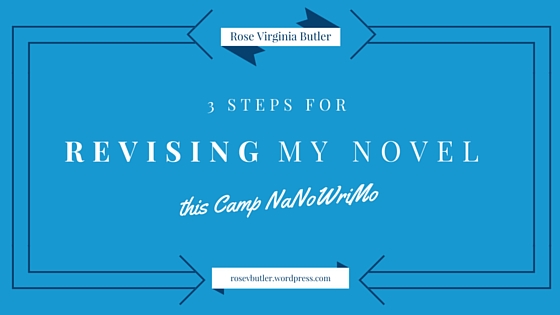 During Camp NaNoWriMo this July, I “enter the dark and terrifying forest” as I revise a novel for the first time. That quote is pulled from Rachel Aaron’s ebook, 2k to 10k. It is one of the books I have been referring to as I plan to revise Nazrat of the Kora, the novel I wrote during last November’s NaNoWriMo. Other books on my list include Stephen King’s On Writing, Janet Burroway’s Imaginative Writing (3rd ed., though I should have the 4th ed. soon), and even The Complete Idiot’s Guide to Writing a Novel, by Tom Monteleone.

As I’m delving into strange territory, I find it necessary to look at the maps created by the explorers and travelers who have been through the forest many times before me. Looking at these maps has helped me develop my own plan for the upcoming month, along with my own goals. Here’s a little of what I’ve learned and some steps I plan to put into action.

1. Figure out what the hell I wrote.

I wrote the first draft of Nazrat several months ago. If I remember correctly, I didn’t really even finish, as I went back and started writing a prologue near the end of the month when I needed more words and ran out of plot. I need to go back through and refresh the story in my head. Rachel Aaron has some great suggestions to help with this that I plan to incorporate.

I also took some advice from Stephen King and had my manuscript printed out. Now, I don’t even own a printer, but I was able to get it printed at FedEx for around $45. That may be a lot for some people and it may not be worth it in the end, but it can’t hurt to try. Again, this is my first novel revision; I don’t know what will or will not work for me yet. I always prefer reading a printed book to reading it on a screen, so I think this will help me evaluate what I wrote as a reader. If it works for me, I’ll probably invest in a good quality printer in the future.

This one’s pretty obvious, but it’s something I hadn’t really thought too much about (mostly because the next step in this list has been more prominent in my mind). Since I wrote this novel based on the original plot in Tarzan of the Apes, I hadn’t really thought there would be many plot holes or anything. However, the original Tarzan was a pop novel, intended to be sensational in order to sell more copies. It wasn’t exactly written with the intention of being “good literature,” so the plot was a little thin and the characters lacked depth. It was like the 1912 version of Twilight.  I didn’t even really like it that much. This brings me to my next action step.

3. Completely change everything and make it a story I love.

Writing this novel was a pretty hellish experience for me. I was in agony over it all November. I was very concerned with making the first draft true to the original novel, but also more modern in its ideas, while trying to come up with interesting science fiction aspects, and it just about killed me. It certainly killed my passion for writing, as I completely abandoned all hope of becoming a professional writer for some time afterward. I never really wanted to revise or publish it.

I’ve slowly but surely been going through a healing process, and reading and “collecting” more has definitely helped with that. Now I’m dedicated to completely changing this beautiful mess in order to make it my own, a story that I truly love with characters that delight me. It’s going to take some major work, and very little of the original manuscript may remain. I’m kind of excited about it, actually.