As you may or may not know, I work at a charming little diner in Winters, California called the Putah Creek Cafe. Most of my time there is spent serving, but about once a week I come in a couple hours early to make sangria. I’m known as the Sangria Girl. This makes me happy in the silliest way.

Well, today I’m a little late getting on the floor to serve because I made four extra cambros of white peach sangria. One cambro holds four and a half gallons of sangria. That’s eighteen gallons total. I used six cases of wine, twenty apples, four pineapples, a dozen mangos, two and a half pounds of grapes, and roughly a ton of preach purée. That’s a lot of sangria. 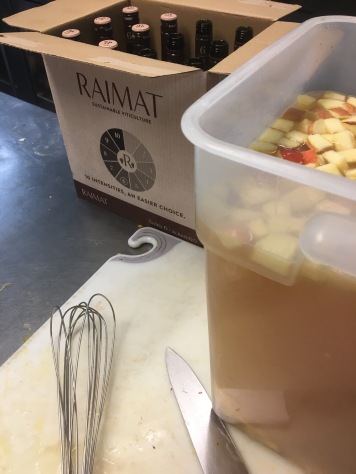 Why? Tomorrow is the second annual Albariño Wine Stroll here in Winters, and we’ll be serving up a special sangria made with Raimat Albariño. I’ll be working after 5:30 that night, and I’m excited to see our bartender serve up this special sangria and tell people that I made it. 😉

Come in and see me! I’ll actually be here all day because I’m working a double, so if you can’t make it to the wine stroll, come see me anyway!